The idea of building a suitable memorial to recognise the service and sacrifice of local soldiers in World War 1, may have begun as early as 1915. On Saturday 4 December 1915, the Mayor and Mayoress of Bendigo (Cr and Mrs Beebe) hosted a Returned Soldiers’ Reception at the Bendigo Town Hall. On the same day, a Red Cross garden party was held at the home of Cr & Mrs J H Curnow on the occasion of one hundred returned wounded soldiers being in Bendigo.

However as historical records from the time show, much happened before the opening of the Bendigo Soldiers’ Memorial Institute on 15 November 1921 and the subsequent unveiling of the permanent Honor1 Roll on 25 April 1926.

On 26 January 1917, the Bendigo Advertiser reported that the suggestion by Cr Curnow that honor boards be erected in the various wards of the city, came before yesterday’s committee meeting of the Council. Councillors instead approved of the suggestion by the mayor, Cr Beebe, to have one central memorial, linked to redevelopment of the Hustler’s Royal Reserve mine site in Pall Mall.

On 29 March 1917, Bendigo City Council minutes record “On the motion of Cr Curnow, the Town Clerk was instructed to work designs suitable for proposed Soldiers’ Memorial and that the Defence Department be written to for a list of names of soldiers from this city, also that the Mayor and Town Clerk be instructed to take the necessary steps for the removal of machinery from site in Pall Mall.”

The Defence Department subsequently advised it could not provide the list required.

Bendigo City Council minutes of 7 June 1917 record “On the motion of Cr Curnow, the Town Clerk was instructed to insert advertisements in the local papers asking relatives of soldiers who have embarked for active service abroad to supply evidence of enlistment for compilation of proposed Soldiers’ Memorial.”

The Bendigo Advertiser reported on 21 September 1917 that the city councillors had visited the portion of Rosalind Park facing Pall Mall to decide the location of the honor roll. A position was chosen almost immediately in front of the old engine house on the old mine site. Over 1000 names had been recorded and the work would be commenced almost immediately.

On 7 December 1917, the Bendigo Advertiser reported “The work of erecting a municipal interim honor roll, or temporary shrine, to bear the names of all the residents of the City of Bendigo who have been accepted for active service, is being proceeded with. The honor roll is being set up in Rosalind Park, in front of the city mine reserve, facing Pall Mall, and will be a conspicuous public testimony of the self-sacrifice and courage of Bendigo boys. The names will be such as to be easily read from the pavement, and they are being painted on panels to be set up on the frame work now in course of completion.
Some 1000 names of soldiers have been ascertained, and the town hall officials are receiving additional names from relatives who have not so far sent in the names of their boys. The council has an item of £75 on its estimates to meet the cost of the temporary honor roll.”

An update in the Bendigo Advertiser on 12 December 1917 reported “The honor roll of Bendigo and district soldiers in course of erection in the reserve adjacent to Pall Mall is nearing completion. Yesterday as the work progressed large numbers of citizens were to be seen eagerly scanning the names of our heroes.”

The Bendigo Advertiser provided a further update on 13 December 1917 by reporting “The setting up of the panels bearing the names of the Bendigo soldiers on the interim honor roll in Pall Mall has resulted in many additional names being sent in to the town clerk for insertion on the list. Yesterday numerous relatives called about names not on the board, and it is explained that only those officially sent in by parents or relatives will be exhibited, so that any who have neglected to forward particulars should not let the opportunity pass of getting their dear ones honored with other Bendigo heroes.” 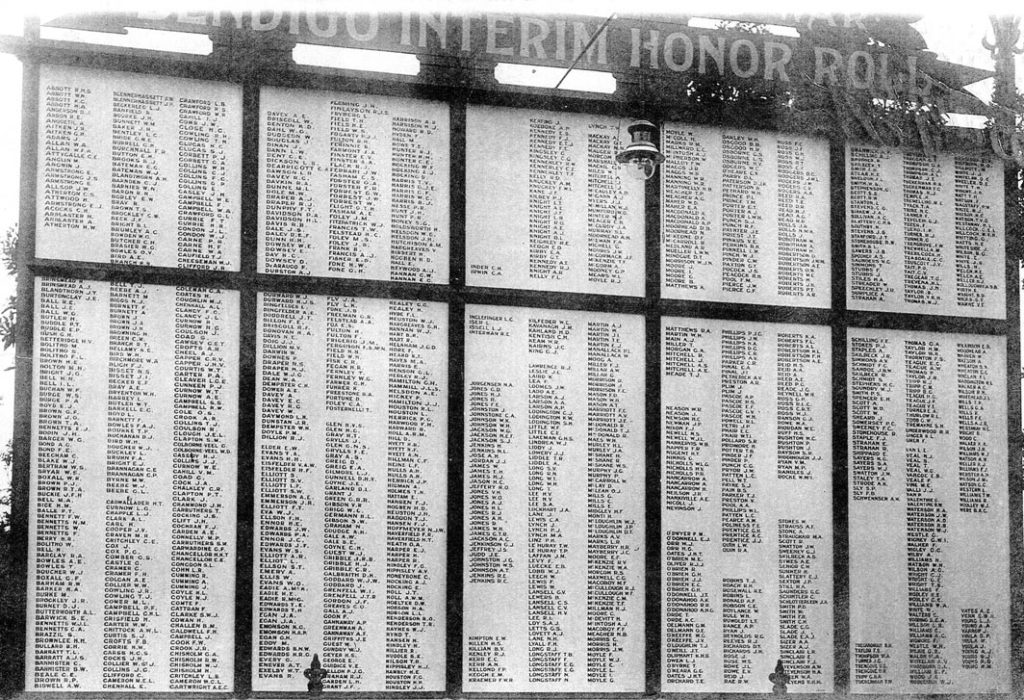 The Soldiers’ Memorial Institute was designed to include a permanent Honor Roll on the walls of the Loggia, however it had not been installed when the building was opened in 1921, due to funding constraints.

The Interim Honor Roll had stood in Pall Mall for nearly seven years when recently elected RSL President, Major G. V. Lansell launched an appeal in December 1924 for funds and names to complete the Honor Roll at the Soldiers’ Memorial Institute. Funds for the project were raised from a subscription of ten shillings and six pence paid by each relative or friend to have a name included on the Honor Roll.

In June 1925, the Bendigo City Council approved a proposal for ornamental gardens on both sides of the Soldiers’ Memorial Institute and the Interim Honor Roll was dismantled in July 1925.

The Bendigo Advertiser reported on 17 April 1926 that “the first section of the honor roll arrived in Bendigo yesterday evening and that the remaining two sections are expected early next week. The names on the roll stand out prominently in solid copper, with a background of similar metal, are enclosed in fine copper frames, and when all the sections are placed in position they will occupy the whole frontage of the soldiers’ memorial, and will tremendously enhance the appearance of this beautiful building.”

This project, launched on 24 December 1924 was complete when on 25 April 1926, Mr R. A. Rankin President of the Fathers’ Association, unveiled the Honor Rolls on the solid walls of the Loggia of the Soldiers’ Memorial Institute. The Rolls contain 2,972 names including forty two nurses. The Honor Rolls were made by Thomas Joseph Schofield, an artist who owned The Brilliant Sign Company in Lonsdale Street, Melbourne.

Some names are duplicated as more than one subscriber paid and there are a number of spelling mistakes. Not all of those listed served with Australian forces as a number are known to have served with Allied forces including New Zealand, South African, British and American forces.

Because of the way names were put forward for inclusion for both projects, neither the Interim Honor Roll nor the current Honor Roll necessarily contained a comprehensive list of the names of all those from Bendigo and surrounding areas who served in World War One.

The Honor Rolls did not identify those who paid the Supreme Sacrifice as a result of their service. Research undertaken in the last five years has identified the names of 499 such people for inclusion in a website that will also be available to access in the refurbished Soldiers’ Memorial Institute when it reopens in late 2018. 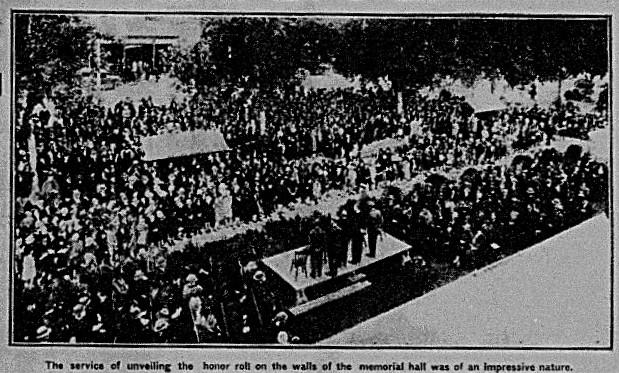 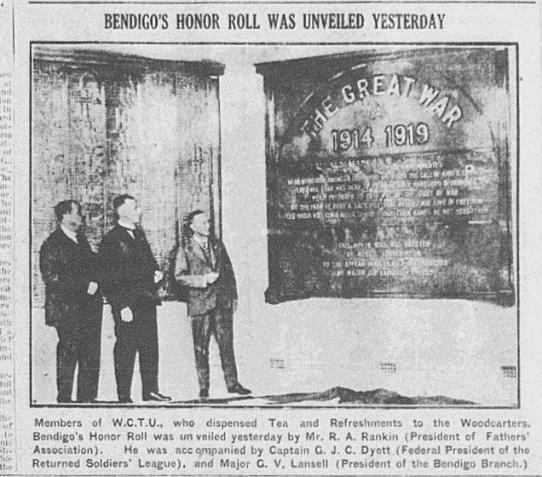 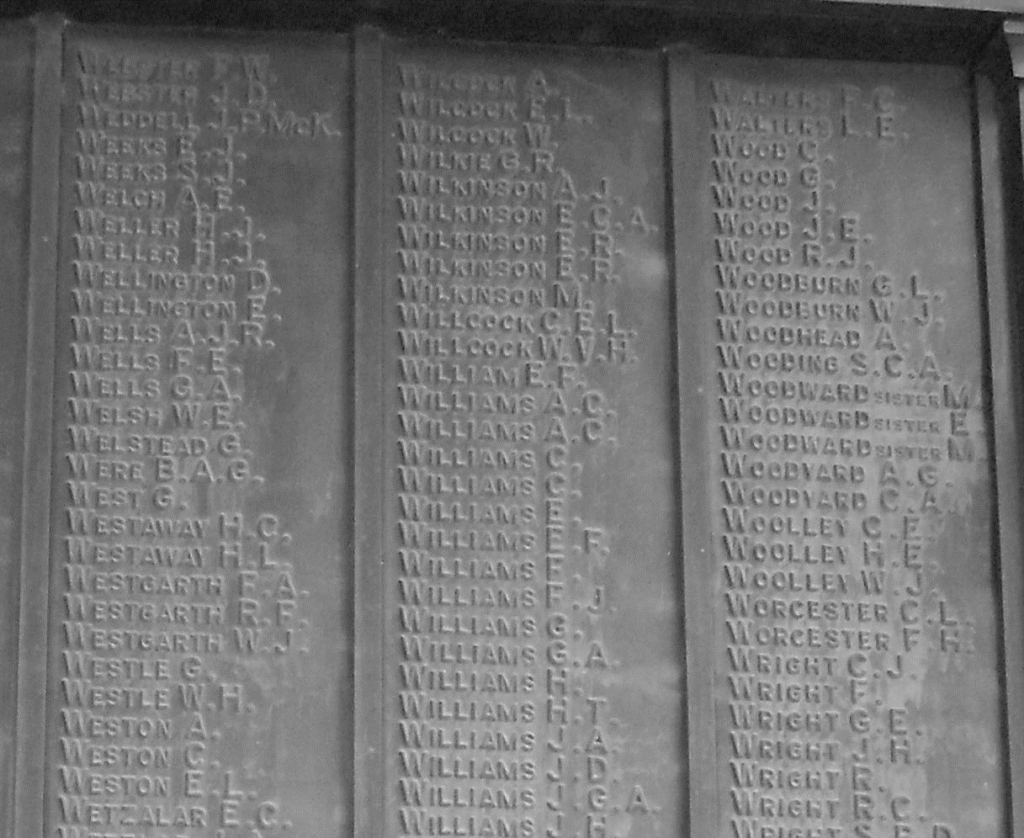 1 The accepted spelling of the word ‘honour’ in Australia at this time was ‘honor’ and it is not clear when the spelling shift occurred.